Our everyday lives are expanding fast with the introduction of new Smart Home Systems (SHSs). Today, a myriad of SHS devices and applications are widely available to users and have already started to re-define our modern lives. Smart home users utilize the apps to control and automate such devices. Users can develop their own apps or easily download and install them from vendor-specific app markets. App-based SHSs offer many tangible benefits to our lives, but also unfold diverse security risks. Several attacks have already been reported for SHSs. However, current security solutions consider smart home devices and apps individually to detect malicious actions rather than the context of the SHS as a whole. The existing mechanisms cannot capture user activities and sensor-device-user interactions in a holistic fashion. To address these issues, in this project, we introduce Aegis, a novel context-aware security framework to detect malicious behavior in a SHS. Specifically, Aegis observes the states of the connected smart home entities (sensors and devices) for different user activities and usage patterns in a SHS and builds a contextual model to differentiate between malicious and benign behavior. We evaluated the efficacy and performance of Aegis in multiple smart home settings (i.e., single bedroom, double bedroom, duplex) with real-life users performing day-to-day activities and real SHS devices. We also measured the performance of Aegis against five different malicious behaviors. Our detailed evaluation shows that Aegis can detect malicious behavior in SHS with high accuracy (over 95%) and secure the SHS regardless of the smart home layout, device configuration, installed apps, and enforced user policies. Finally, Aegis achieves minimum overhead in detecting malicious behavior in SHS, ensuring easy deployability in real-life smart environments.

In following figure, a typical architecture of a SHS is shown. A SHS has four basic building blocks as shown in Figure 1. The first block of the SHS comprises sensors and devices in the system. These smart home devices and sensors are connected to each other via a smart hub. As there is no generic interoperability standard among smart home devices, the hub provides a common access point for all the entities in the SHS. The hub is connected to both cloud backend service and smartphone/tablet companion app. Users can use the smartphone app to control the smart home entities or install different apps from the app stores. Indeed, we can group SHS architectures in two main categories: a cloud-based architecture where the installed apps run in the cloud backend (e.g., SmartThings), and hub-based architecture where the installed apps run the hub locally (e.g., Apple HomeKit).

Figure: A smart home environment and its major components 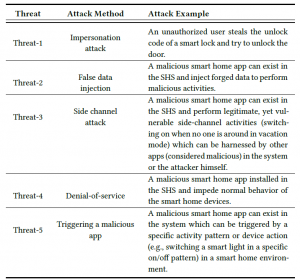 Context-awareness: Context-awareness refers to the ability of a system to use situational and environmental information about the user, location, and devices to adapt its operation accordingly. In a SHS, all the sensors and devices follow different trigger-action scenarios to perform tasks. Here, sensors are used to provide input in the devices (trigger) and devices take autonomous decisions (actions) based on these inputs. When a user performs a task in a SHS, several smart home sensors and devices may become active in a sequential pattern. The pattern of active devices and sensors is different but specific for distinct user activities. Existing SHS cannot observe these patterns in sensors’ and devices’ states over time and can not understand the context of the user activity. For example, while a user moves from one bedroom to a hallway, several devices and sensors become active in a sequential manner (Figure~\ref{context}): moving towards bedroom door (sub-context 1: BL1, BLi1, BM1 are active), bedroom door opens (sub-context 2: BL1, BLi1, BM1, BD1 are active), entering the hallway (sub-context 3: BL1, BLi1, BD1, HLi2, HL2, HM2 are active), bedroom door and light close and reaches the hallway (sub-context 4: HLi2, HL2, HM2 are active). To complete the activity (moving from the bedroom to the hallway), the user must follow the sub-contexts in the same sequential pattern. The user cannot skip one specific sub-context and move to the next one to complete the activity. For instance, the transition from sub-context 1 to sub-context 4 is not possible as a user cannot go to the hallway from the bedroom without opening the door. Motivated by this, Aegis is designed to understand this property of SHS to build a context-aware model for different user activities and usage patterns and differentiates between benign and malicious activities of smart home devices and sensors.

User activity-device correlation: In a SHS, different users utilize and control smart home devices in multiple ways. For instance, a user can set a security camera to take pictures whenever a motion is detected in the associated motion sensors. On the other hand, users control devices in multiple ways. For example, a user can unlock a door by using the smartphone app or entering the code manually. Here, the state of the lock can be determined by user activity on the smartphone or by using a presence sensor to detect the user near the smart lock. In short, by observing the user activities in a SHS, it is possible to determine the normal operation of smart home devices. One can define normal or malicious user behavior with the user activity-device correlation. Current SHS cannot correlate user activity and device actions correctly, which is considered as a feature in Aegis to differentiate benign and malicious activities.

Finally, the malicious activities detected by the anomaly detector module are forwarded to the action management module. This module notifies the users regarding the unauthorized activities. Also, it offers adaptive training mode where users can validate any false positive or false negative occurrence and re-train the detection model to improve the performance of Aegis.