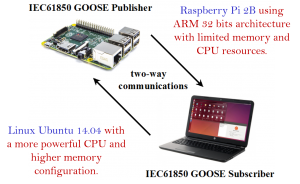 We consider six different types of compromised devices with different computing resources and hardware capabilities. Our adversary model also complies with the security requirements defined by the US National Institute of Standards and Technology (NIST) for the smart grid. Considering the high device diversity of the smart grid, we define two types of devices: resource-rich and resource-limited devices. For our analysis, we consider a compromised smart grid device (e.g., RTUs, PMUs, IEDs, etc.) as a genuine device with some malicious function installed on it. The malicious function can be due to a compromised hardware or software component installed on the smart grid device otherwise assumed to be genuine. The malicious function can change the basic operations of the original device and it could have been installed either in one of the supply chain stages or while performing software upgrade in the field.

Overview of the Proposed Framework

The proposed framework compares and correlates, based on three different detection approaches, the statistical information of system and function calls lists from equivalent ground truth and compromised devices that are performing similar tasks in the smart grid infrastructure. For this purpose, we create a database of different ground truth profiles (GTPs) from genuine smart grid devices throughout our learning process. Different profiles need to be created for different class of devices that are performing different operations in the smart grid infrastructure.

There are three fundamental operations in our framework: 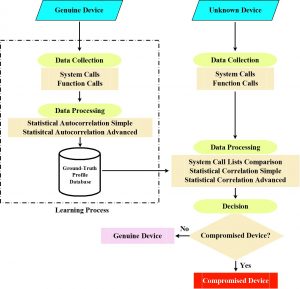 In order for our framework to be useful for any realistic smart grid scenario, the tool should be able to work with relative accuracy and scalability. In our case, the former refers to the performance during compromised device detection. On the other hand, the latter refers to the possibility of our framework to cope with the high smart grid device diversity. Also, our framework has to make efficient use of the resource. For that reason, the three detection methods proposed are applied as needed to save from energy and computing resources.

Experimental results demonstrated an excellent detection rate for the compromised smart grid devices. Performance metrics revealed accuracy values between 0.95 and 1 for the different devices and detection methods analyzed. Additionally, the detailed performance analysis showed minimum overhead on the use of computing resources (i.e., CPU, memory, etc.) with our framework. On average, memory utilization does not increase more than 0.03 % while real, system, and user time would not increase more than 230 ms for even the worst case scenario (resource-limited devices). 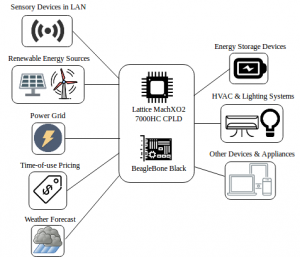 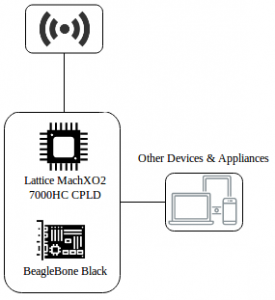 As the population of the world edges closer to the eight billion mark, global energy consumption is at an all time high. In this scenario, Energy Management Systems (EMS) have been proposed and implemented in recent years to increase the efficiency and lower the total power consumption in households and the industry. On average, EMS result in 30\% increased power consumption efficiency. In addition, the average savings of EMS for artificial lighting systems, HVAC systems, motors and others are 39.5%, 14.07%, and 16.66%, respectively, highlighting the need for an increased adoption of such systems in a residential and industrial settings.
The Cybersecure Power Router (CSPR) is an example of such an energy management system. CSPR optimizes residential energy management to maximize energy cost savings by utilizing renewable energy and energy storage devices in an intelligent way. CSPR receives data from various external sources to collect weather information, time of use pricing, as well as coordination data from devices present within the smart grid local area network. Cyber-resiliency of CSPR is one the primary goals being considered during its development. However, due to the numerous external communication channels that it employs, it is left susceptible to outside interference from malicious entities wishing to decrease grid reliability, interrupt the homeowner’s access to electricity, or cause other disruptions. An instance of such an attack occurred in 2015, when half the homes in a Ukrainian city were left without electricity for 2 hours as a result of the Black Energy Trojan . The Stuxnet worm that caused significant damage to the Natanz Nuclear Power Plant in Iran in 2009, is another example of cyber-attackers disrupting energy production and distribution.
To add a highly critical layer of protection to CSPR and other sophisticated distributed energy resources (DER) from compromised malicious devices, we propose a novel framework that realizes the integration of the Cybersecure Power Router with PowerWatch, a cyber security solution capable of detecting compromised devices in a smart grid environment. PowerWatch uses the information provided by system call lists to detect malicious activities from the smart grid devices. After collecting the system or library call lists, PowerWatch predicts the next call using the calls preceding it. An activity signal is generated, specifying how close the device is functioning as compared to benign operating behaviour. The signal is then subjected to a configurable threshold: if the signal exceeds the threshold at any point in time, it can be concluded that the device has been compromised.